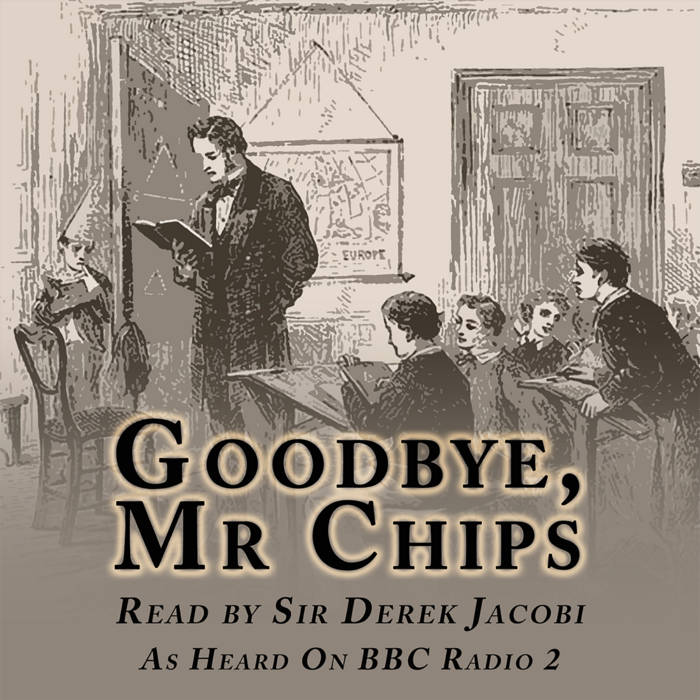 Originally broadcast on BBC Radio 2 in 2005

Sir Derek Jacobi reads James Hilton’s 1934 classic novel “Goodbye, Mr Chips”, in this newly abridged five part version. Over the five instalments we follow Mr Chips' life as he remembers it in flashback from the comfort and serenity of retirement at Mrs. Whitlow’s cottage. A moving and emotional story, spanning a lifetime and filled with many colourful and recognisable characters. This new abridged version, by renowned abridger Neville Teller, keeps true to the original work, rather than the famous 1939 MGM movie. Evocative and touching, “Goodbye, Mr Chips” is a timeless story that will bring a tear to everyone’s eye.

Novelist and screenwriter James Hilton was born in Leigh in Lancashire in 1900 and died in Long Beach, California in 1954. He found literary success at an early age, his first novel, Catherine Herself, having been published in 1920. His novels include Goodbye Mr Chips, Random Harvest and Lost Horizon (which won a Hawthornden Prize) - all made into feature films. As a screenwriter he contributed to the war-time classic Mrs Miniver (also featuring Greer Garson, who starred as Katherine in the first film version of Goodbye, Mr Chips).

Goodbye, Mr. Chips was first published in 1934 and tells the story of a much-beloved schoolteacher, through the long years of his tenure at the boys' school where he once taught. Mr Chipping's initial shyness and sternness is conquered when he meets and marries a young woman he meets on holiday. First published in the British Weekly and subsequently in The Atlantic Monthly, the novel was written in four days against a tight deadline and has never been out of print since. It is based on the author's personal experiences as a senior classics master at a public school in Cambridge.

The book has been adapted several times for film and television, the best known screen version being the 1939 MGM movie, starring Robert Donat as Mr Chipping, Greer Garson as Katherine, Terry Kilburn, John Mills and Paul Henreid. The adaptation was written by R.C. Sherriff, Claudine West and Eric Maschwitz, and directed by Sam Wood, gaining 7 Academy Awards nominations, including Best Picture, Best Director, Best Actress (Greer Garson), and Best Adapted Screenplay. Robert Donat received an Oscar for Best Actor, beating Clark Gable in Gone With the Wind, James Stewart in Mr Smith Goes To Washington and Laurence Olivier in Wuthering Heights. The movie marked Greer Garson’s film debut and made her an overnight star. The film was one of the most critically acclaimed films of its time and is well lodged in English history and popular culture, as it is based on the real life of William H. Balgairne, who taught at the Leys School in Cambridge. It was shot at the Repton School, which was founded in 1557, and numerous students and faculty members worked on the film for free.

The 1984 BBC television production boasts Roy Marsden as Chipping, who ages very convincingly from idealistic young master to crabbed old retired beak. The producer was Barry Letts and it was directed by Gareth Davies.

In the latest film version of Goodbye, Mr Chips, which is now filming for ITV1 in locations across London and the South East, Martin Clunes stars as Mr Chips, and Victoria Hamilton plays his wife Kathie. Martin Clunes plays Chips throughout - from an idealistic teacher in his late 20s to a wiser, gentler, retired headmaster in his 80s. Chips’ close friend Staefal is played by Conleth Hill, Wetherby is played by John Wood, Patrick Malahide is Ralston and Julian Wadham is Chatteris. Directed by Stuart Orme, James Hilton’s classic school story has been adapted for television by Frank Delaney. The producer is Margaret Mitchell, and the executive producers are Judy Counihan and Kumari Salgado. This will be the fourth screen version of Goodbye, Mr Chips.

Derek George Jacobi was born on October 22, 1938 in Leytonstone, East London, England, and is the only child of a department store manager and a secretary. He always loved movies and would go to them every chance. He went to the Leyton County High School where he was an integral part of the drama club, The Players of Leyton. Since that was an all-boys school, he had to play female parts until his voice broke, his first male part being DeSoto in The Last of the Inca. His performance as Hamlet won him great national accolades when the school troupe played it at the Edinburgh Festival in 1957.

As a result of that acclaimed Hamlet, he was invited to see a 20th Century Fox agent in Soho, who finally decided that Derek was too young (he was 18). Derek then went to Cambridge for three years on a scholarship, where his younger classmates included Ian McKellen and Trevor Nunn. Since drama was not a recognized course of study, he chose history, but he never had any doubts about acting and never once believed that he would become a teacher.
During that time he played many leading parts including another Hamlet, which was taken on tour to Switzerland where he met Richard Burton. Burton advised him to roughen up his voice because it was so mellifluous that, he thought, it would end up putting audiences to sleep. As a result of his wonderful performance of Edward II at Cambridge, he was invited to become a member of the Birmingham Rep immediately upon graduation.

Upon being seen by Sir Lawrence Olivier in a Birmingham Rep production of Henry VIII, Olivier invited him back home to London to become one of the eight founding members of the new National Theatre. He was the youngest and only unknown of the eight members, and played in Othello and As You Like it (with Anthony Hopkins) amongst others.

Derek left the NT in 1971 to pursue a larger variety of roles and mediums, including television. In 1972, he starred in the BBC miniseries Man of Straw, directed by Herbert Wise, who also cast him for the title role in I, Claudius three years later. Other television work included Richard II and Hamlet in the BBC Shakespeare plays. Derek now consistently played leading roles on the stage, starting with a triumphant return to the Birmingham Rep in a virtuosic double bill of Oedipus Rex and The Critic. Most of his theatrical work in the 70s was with the touring classical Prospect Theatre Company, with which he did a variety of roles including Ivanov, Pericles and Hamlet, the latter prestigiously being invited to play at Elsinore Castle.

In 1980, Derek gave his Broadway debut in The Suicide and then joined the Royal Shakespeare Company from 1982-1985 where he alternated four demanding roles in repertoire at the same time: Benedick, Prospero, Peer Gynt and Cyrano de Bergerac. In 1986, he made his commercial West End debut in Breaking the Code, which was also taken to Broadway, and continued in the West End two years later when he alternated the roles of Shakespeare's Richard II and Richard III in repertoire. Important TV and film work of the 80s included parts in Inside the Third Reich, Little Dorrit and Henry V.

The 1990s saw a continuation of classical stage work with Kean at the Old Vic, Becket in the West End and Macbeth at the RSC in both London and Stratford. In 1995, Derek became artistic director of the Chichester Festival Theatres for two successful seasons. He also starred in four plays, including his first Uncle Vanya in 1996. Television highlights during the 90s included 13 episodes of the Cadfael Mysteries (1994-1998) and a televised version of Breaking the Code. Film highlights included marvellous performances in Dead Again, Hamlet (as King Claudius) and Love is the Devil.

The only other English actor to hold two knighthoods, Danish and English, he describes himself as "placid in temperament", putting all the temperament and emotion he has into his plays. He is admittedly a workaholic whose compulsion is acting.

Derek has since worked with director Neil Gardner on a number of radio productions, including "Don Carlos" for BBC Radio 3, and the internationally award-winning science fiction drama "Mayflies" for BBC Radio 4.

Originally broadcast on BBC Radio 2 in 2005.