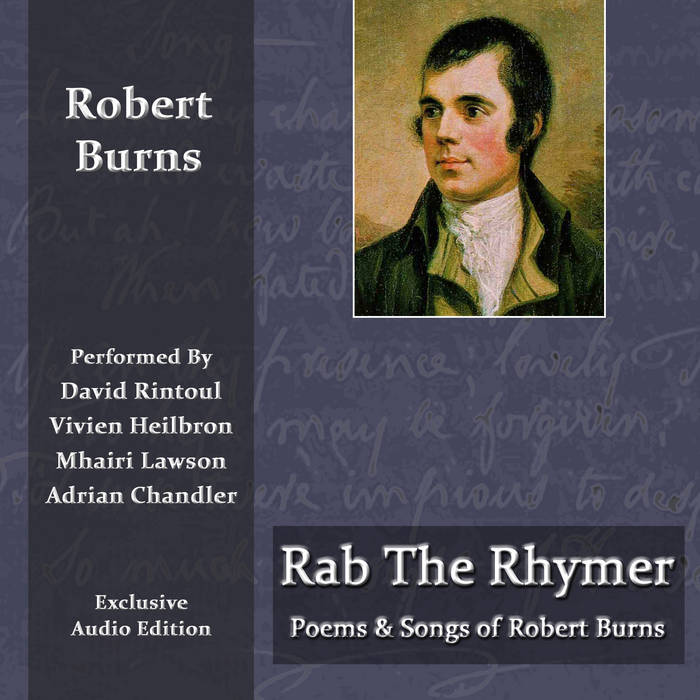 N.B. A CD version of this audiobook is available via our friends rhymescheme records:

Performed by two husband-and-wife teams - acclaimed actors David Rintoul and Vivien Heilbron, and eminent musicians Mhairi Lawson and Adrian Chandler - the audiobook presents not only Burns's greatest hits, but also a selection of his lesser-known, yet fascinating works. Together these provide a comprehensive overview of his prodigious and versatile genius.

Divided into four thematic sections ('Love', 'Of Mice & Men', 'Off to War' and 'Food & Drink'), there's favourites like "A Red, Red Rose", "To A Mouse", "Tam O'Shanter" and "Ae Fond Kiss", interspersed with less familiar poems and songs such as "Rattlin' Roarin' Willie", "The Slave's Lament" and Burns's philosophy of poetry summarized in the three "Epistle to J. Lapraik".

Part One : LOVE
A Red, Red Rose
News, Lassies, News
Mary Morrison
The White Cockade
Jame Come Try Me
The Rigs o' Barley
Wha is that at My Bower-Door?
A Poet's Welcome tae his Bastart Wean
Fine Flowers in the Valley
What can a Young Lassie do wi' an Auld Man?
John Anderson, My Jo
Sweet Afton
The Banks o' Doon
Interlude - The Art of Poetry: Epistle to J Lapraik, Part 1

Part Two : OF MICE & MEN
To a Mouse
Is There for Honest Poverty (For A' That)
The Slave's Lament
Holy Willie's Prayer
Inerlude - The Art of Poetry: Epistle to J. Lapraik, Part 2

Part Three : OFF TO WAR
Robert Bruce's March to Bannock burn (Scots Wha Hae)
Ae fond Kiss, and Then We Sever
I Hae Been at Crookieden
O Kenmure's On and Awa', Willie
Ye Jacobites by Name
A mother's lament for the death of her Son
Such a Parcel of Rogues in a Nation
Ca' the Ewes to the Knowes
Interlude - The Art of Poetry: Epistle to J.Lapraik, Park 3

Robert Burns may be the national poet of Scotland, but his worldwide fame is such that he has, as of 2008, 10 statues or memorials dedicated to him in the USA; 9 in Canada; 5 in Australia; 2 in New Zealand and even one in London. He's been commemorated on stamps, banknotes, in a stage musical and has even had entire towns named after him. To cap it all, he's given his name to one steam and one electric locomotive on Britain's railways. And all this for a tenant farmer's son from south west Scotland.

Indeed, many commentators during his lifetime and since, have sentimentalized him as a "heaven-taught ploughman"; and it's true, Burns was brought up in poverty and was no stranger to unrelenting manual labour, which contributed both to his frail physical constitution and, it's thought, his death at the age of just 37. But his father William insisted that his children were educated wherever and whenever possible, and he was well-tutored in a wide range of subjects. This comparative sophistication made a lasting impression on the 16-year-old Walter Scott, who later remembered:

"His person was strong and robust; his manners rustic, not clownish, a sort of dignified plainness and simplicity which received part of its effect perhaps from knowledge of his extraordinary talents . . . I think his countenance was more massive than it looks in any of the portraits ... there was a strong expression of shrewdness in all his lineaments; the eye alone, I think, indicated the poetical character and temperament. It was large, and of a dark cast, and literally glowed when he spoke with feeling or interest. I never saw such another eye in a human head, though I have seen the most distinguished men of my time."

Burns's first published work, 'Poems, Chiefly in the Scottish Dialect", appeared in 1786, and he was almost immediately feted by the literati of Edinburgh, to where he relocated for just over a year. He was most certainly a man with a mission: in his poem "The Answer" he makes plain his ambition to do his bit for Scottish culture: Ev'n then a wish (I mind its power)/ A wish, that to my latest hour/ Shall strongly heave my breast;/ That I for poor auld Scotland's sake/ Some useful plan, or book could make,/ Or sing a sang at least.

To this end, Burns also collected and preserved traditional Scottish songs as well as writing many of his own. These total several hundred, many written in Scots and Anglo-Scots dialect, helping to preserve and disseminate not just the nation's literature, but its language too. The poems and songs cover a wide range of themes, personal, political and historical, and are written in a variety of tones - tender, satirical and rousing, among many others.

Burns has often been hailed as a proto-Romantic poet, a predecessor to Wordsworth, Coleridge, Keats and Shelley. And there's much to be said for this thesis: his sensitivity to nature, his high valuation of feeling and emotion, his spontaneity, his fierce stance for freedom and against authority, his individualism, and his antiquarian interest in old songs and legends were shared, in whole or part, by many later poets across the border.

Burns is also well-known, even notorious, for his philandering, his tendency to father children out of wedlock, drinking, carousing and general bad behaviour. A large body of bawdy verse has also been attributed to him. Yet for a' that (or perhaps because of it), his popularity has never waned, from the moment he wrote this frank assessment of his Edinburgh reception in a letter of 7 December 1786 to his friend Gavin Hamilton:

"I am in a fair way of becoming as eminent as Thomas a Kempis or John Bunyan; and you may expect henceforth to see my birthday inserted among the wonderful events, in the Poor Robin's and Aberdeen Almanacks.... and by all probability I shall soon be the tenth Worthy, and the eighth Wise Man, of the world."

And, of course, he got his wish - "Burns Night" is celebrated around the world on or around the poet's birthday on 25th January. And elsewhere in this booklet, we tell you how to join in the fun - that's if you haven't already!

David Rintoul: David is a hugely experienced TV and theatre actor. He's worked with the Royal National Theatre in London, the Royal Shakespeare Company in Stratford-on-Avon; has played Mr Darcy in a BBC adaptation of Jane Austen's 'Pride & Prejudice', and the lead role in the evergreen 'Dr Finlay'. Born in Aberdeen, and educated at Edinburgh University, he now lives in London with his wife . . .

Vivien Heilbron: Vivien is an Emmy nominee (for her performance in Wilkie Collins’s ‘The Moonstone’); has acted in ‘Eastenders’, ‘Poirot’ and ‘Taggart’, and played the lead role of Chris Guthrie in the much-loved BBC adaptation of Lewis Grassic Gibbons’s trilogy of novels ‘A Scots Quair’. She also has a long and distinguished stage career, and is an Honorary Fellow of the Shakespeare Institute in Stratford-on-Avon.

Adrian Chandler: Our only non-Scot (but you can’t tell that from his exquisite violin playing), Adrian is a graduate of the RCM, founder of the period ensemble La Serenissima, and has countless concert appearances, broadcasts and recordings to his name. Find out more at laserenissima.co.uk

Mhairi Lawson: Mhairi writes: “Burns' work has played a major part in every stage of my life - as a child in school when we learned the various poems and also as a teenage pianist when I would occasionally accompany my mum at Burns suppers - the songs of the Scots Musical Museum, which Burns co-edited, have been with me throughout my career as a classical singer, and have travelled with me from the Edinburgh Festival to places such as Poland, Greece and England (!) , making an impact that operatic arias have no hope of following.”