by The British Comedy Company 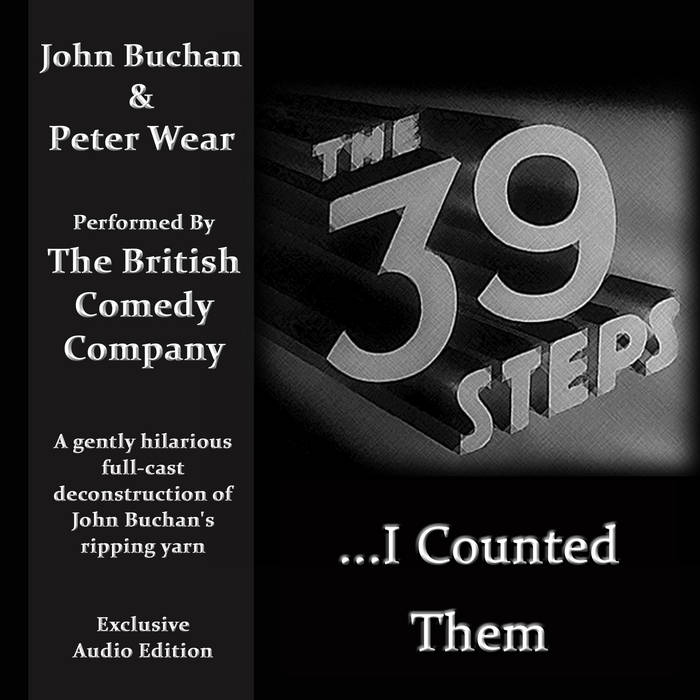 A gently hilarious full-cast deconstruction of John Buchan's ripping yarn, courtesy of the British Comedy Company. It's a hoot!

"If someone had come up to me a week ago and said, "Richard Hannay, within a week you will be wanted for murder, suffer serious injury, be pursued by spies, lost on the Scottish Moors, handcuffed to a beautiful woman and shot," I would have said, "When do I start?"

John Buchan, with his Establishment hat on, was actually the 1st Baron Tweedsmuir, and recipient of numerous gongs for service to the Empire. But he was also a prolific writer, publishing over 100 books including the "The Law According To the Taxation of Foreign Income," which many still regard as the last word on the subject. Fortunately for us, he occasionally managed to tear himself away from the dark arts of offshore revenue collection to write thrillers, of which "The 39 Steps" is by far his best known - thanks in part to Alfred Hitchcock's brilliant 1935 film version, and now this wonderfully funny and affectionate parody.

Set immediately prior to the First World War, it's a ripping yarn of dastardly foreign spies intent on creating a new world order. It was an immediate bestseller, and has subsequently never been out of print, despite being snootily dismissed as the fons et origo of the "snobbery with violence" type of adventure. PC or not, it remains a cracking story. Other classic thrillers, including Geoffrey Household's "Rogue Male" and Ian Fleming's "James Bond" novels owe it more than a passing debt - as does the audio you're hopefully about to download. And at this point, it's probably best to let Peter Wear, founder of the British Comedy Company, attempt to justify the liberties he's taken with Buchan's masterpiece .

"Who is to say that the story Richard Hannay told to John Buchan is the true version of the events he described? Maybe he was holding something back for reasons of national security, or so as not to offend the sensibilities of the time, or, more likely, to avoid embarrassment at the club. After extensive research, and a degree of artistic licence, it has become clear that the story is more amusing than was first thought."

And so it is. This affectionate and masterful parody contains plenty to laugh at. Not belly laughs, necessarily - Peter's subtle and refined humour is of a kidney that never draws attention to itself with great neon signs proclaiming "look at this - here comes the joke!" It's more that the comedy sneaks up behind you, then whacks the back of your head with a spade. "Never knowingly funny" might be its motto - and "The Thirty-Nine Steps . . . I counted them" is all the more successful for this softly softly approach.

P.S. The 39 Steps actually do exist - they form a tunnelled stairway leading from a hilltop villa down to the beach in the appropriately named English seaside town of Broadstairs - the very house in which Buchan was convalescing in 1914 while he was writing the book.

released November 24, 2010
Written by Peter Wear based on the original by John Buchan
Produced by The British Comedy Company