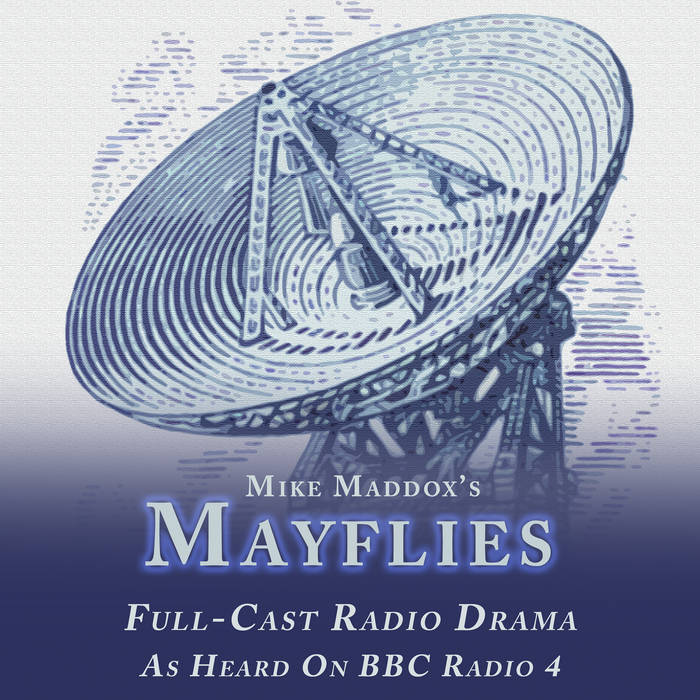 
When a message from outer-space is received, how does this revelation affect one man and his immediate group of friends and relations? And when he gets the task of deciding whether to reply or not, just what should he recommend?

In Mike Maddox’s “MAYFLIES”, DOUGLAS SCOFIELD, an eminent astronomer, has retired to the Hampshire countryside, where he now runs a fish farm. Following the death of his wife, he now spends most of his time in pursuit of fish and is losing himself in his pastime. His plans are disrupted when a colleague, MOLE, calls bringing with him shattering news. The project he set up thirty years ago has finally borne fruit and has received a signal from space, almost certainly of extra terrestrial origin. The signal appears to be genuine, and may be asking for a reply. The question is should we?

It falls to DOUGLAS to make the decision.

Far from being optimistic, however, he finds that his total absorption in fishing has given him a new perspective. With fly-fishing, the skill needed is to match the exact lure with the right conditions. Previous attempts to communicate with aliens are more like fishing with a float and bait; you stick something out and hope it takes. But this new message reminds him too much of fly-fishing. What if the message has been matched to give us exactly what we want to hear at this exact moment? Trout are predators, after all. But there are greater predators still that feed on them in turn. Including the ultimate super predator on Earth; mankind.

What if this message is not an invitation from friends, but is a lure dropped to us to see if we will take the bait?

DOUGLAS hears from an old flame, a girlfriend from his youth who has heard of his loss and wishes to get back in touch. Again, he draws parallels with the message from the stars. Does she just want some contact with someone she once loved, or does she want something more? And should he reply to her? And his daughter LUCY is due to give birth to his first grandchild at any moment…how will replying to the message affect the life of his grandchild, positively or negatively?

The extra terrestrial message would appear to be from a world that would have been destroyed long before mankind arose. It would also suggest that it carries messages form not one but two distinct cultures. If we choose to reply then it may be that our message will only reach its destination long after we have ourselves vanished as a species. Perhaps the development of technology is always the death knell of a species. His old love has no intention of renewing their acquaintance. She simply wants to know that he is still there, and know that he remembers her fondly.

With this in mind he makes his recommendation. It may be that it is a lure, bait from some dreadful predatory race. But it may simply be a voice in the darkness, asking for reassurance. True space travel is an impossibility, and meaningful communication impossible given the vast distances involved. Perhaps the best we can hope for is to pass on messages to those who come after us. DOUGLAS, with this is mind, composes a message himself...to his new-born grandchild.

Mike Maddox is an established writer with several successful audio dramas to his name, including “Doctor Who: Circular Time”, starring Peter Davison as the Doctor for Big Finish productions and aired on BBC7 . He has also scripted 2 episodes of “Spring” for Doctor Who starring Hugh Fraser as a scheming Time Lord, and “Summer” starring David Warner as Sir Isaac Newton. He wrote “The Lion Graphic Bible”, published in 1998 - a full-length comic strip adaptation of the bible in graphic novel format, it has sold some 500,000 copies in 22 languages since publication in 1998.

Neil Gardner has written, produced and directed two New York Gold Award winning comedy-dramas and executive produced dramas for Radio 3, 4 and the Wellcome Trust. He is an avid science-fiction and fantasy fan, and one of the leading voices in developing more audio and radio output for these genres in the UK. He recently wrote, produced, edited and directed the 13 part full-cast audio drama/comedy series “The Brightonomicon” for BBC Audio Books and BBC7. He is the owner and MD of Ladbroke Productions, the oldest independent radio production company in the UK, with over 300 BBC productions made to date.

Dirk Maggs is well known for his many superb, and often award-winning radio dramas and series. He has written and directed the Hitch-Hiker’s Guide To The Galaxy radio sequels, as well as the Dirk Gently series. He is widely regarded as one of the finest radio producer/directors of the past 20 years.