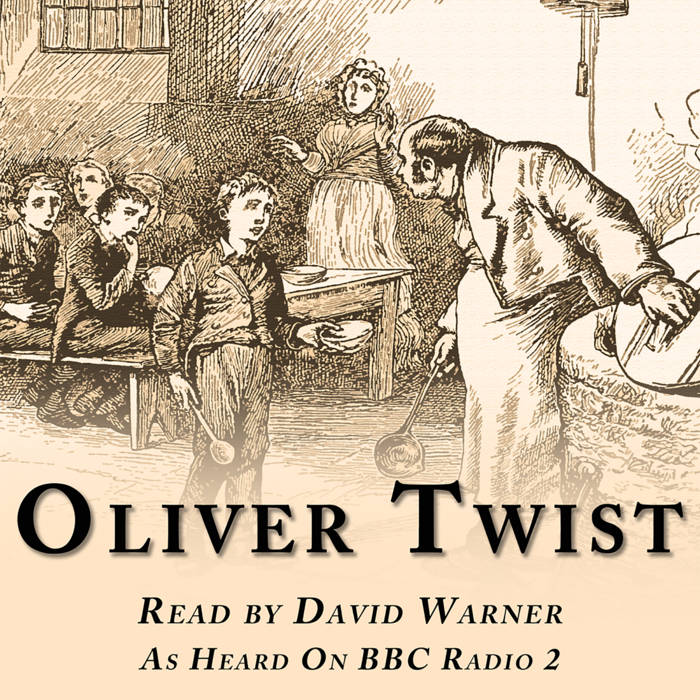 In this departure from the merry world of Pickwick, Dickens targets the Poor Law Amendment Act of 1834 which renewed the importance of the workhouse as a means of relief for the poor.

Dickens was severely criticized for introducing criminals and prostitutes in Oliver Twist, to which Dickens replied, in the preface to the Library Edition of Oliver Twist in 1858, "I saw no reason, when I wrote this book, why the very dregs of life, so long as their speech did not offend the ear, should not serve the purpose of a moral, at least as well as its froth and cream".

One of the most dramatized of Dickens' works, Oliver Twist was appearing in 10 theatres in London before serialization of the novel was even completed. There are 25 film versions currently listed, the first in 1906. Academy Award winning filmmaker Roman Polanski is the latest to bring the little orphan boy to the silver screen.

Charles Dickens (1812-1870) is considered to be one of the greatest English novelists of the Victorian period. Dickens's works are characterized by attacks on social evils, injustice, and hypocrisy.

Charles Dickens was born in Landport, Hampshire on February 7, 1812. His father was a clerk in the navy pay office, who was well paid but often ended up in financial troubles. In 1814 Dickens moved to London, and then to Chatham, where he received some education. He worked in a blacking factory, Hungerford Market, London, while his family was in Marshalea debtor's prison in 1824).

In 1824-27 Dickens studied at Wellington House Academy, London, and at Mr. Dawson's school in 1827. From 1827 to 1828 he was a law office clerk, and then worked as a shorthand reporter at Doctor's Commons. He wrote for True Son (1830-32), Mirror of Parliament (1832-34) and the Morning Chronicle (1834-36). He was in the 1830s a contributor to the Monthly Magazine, and The Evening Chronicle and edited Bentley's Miscellany. In the 1840s Dickens founded Master Humphry's Clock and edited the London Daily News.

Dickens's career as a writer of fiction started in 1833 when his short stories and essays appeared in periodicals. His Sketches By Boz and The Pickwick Papers were published in 1836.In the same year he married the daughter of his friend George Hogarth, Catherine Hogarth.

The Pickwick Papers were stories about a group of rather odd individuals and their travels to Ipswich, Rochester, Bath and elsewhere. Dickens's novels first appeared in monthly installments, including Oliver Twist (1837-39), which depicts the London underworld and hard years of the foundling Oliver Twist, Nicholas Nickelby (1838-39), a tale of young Nickleby's struggles to seek his fortune, and The Old Curiosity Shop (1840-41).

From the 1840s Dickens spent much time traveling and campaigning against many of the social evils of his time. In addition he gave talks and reading, wrote pamphlets, plays, and letters. In the 1850s Dickens was founding editor of Household Words and its successor All the Year Round (1859-70). In 1844-45 he lived in Italy, Switzerland and Paris. He gave lecturing tours in Britain and the United States in 1858-68.


From 1860 Dickens lived at Gadshill Place, near Rochester, Kent. He died at Gadshill on June 9, 1870. The unfinished mystery novel The Mystery Of Edwin Drood was published in 1870.

An infant is born of a dying mother in a parish workhouse. Old Sally, attending the birth and death, takes from the dying woman a locket and ring. Bumble, the beadle, names the boy Oliver Twist. Oliver is sent to an infant farm, run by Mrs Mann, until he is 9 years old, at which time he is returned to the workhouse.

The orphans at the workhouse are starving due to callous mistreatment and cast lots to decide who among them will ask for more gruel on behalf of the group and Oliver is chosen. At supper that evening, after the normal allotment, Oliver advances to the master and asks for more.

Oliver is branded a troublemaker and is offered as an apprentice to anyone willing to take him. After narrowly escaping being bound to a chimney sweep, a very dangerous business where small boys are routinely smothered being lowered into chimneys, Oliver is apprenticed to the undertaker, Sowerberry.

Oliver fights with Noah Claypole, another of the undertaker's boys, after Noah mocks Oliver's dead mother. After being unjustly beaten for this offence, Oliver escapes the undertaker's and runs away to London.

On the outskirts on the city Oliver, tired and hungry, meets Jack Dawkins who offers a place to stay in London. Thus Oliver is thrown together with the band of thieves run by the sinister Fagin. Oliver innocently goes "to work" with Dawkins, also known as the Artful Dodger, and Charlie Bates, another of Fagin's boys, and witnesses the real business when Dawkins picks the pocket of a gentleman. When the gentleman, Mr. Brownlow, discovers the robbery in progress Oliver is mistaken for the culprit and, after a chase, is captured and taken to the police. Oliver, injured in the chase, is cleared by a witness to the crime and is taken by the kindly Brownlow to his home to recuperate.

Oliver is kindly treated at the Brownlow home and, after a period of recuperation, is sent on an errand by Mr Brownlow to pay a local merchant 5 pounds and to return some books. On carrying out this charge Oliver is captured by Nancy and Bill Sikes and returned to Fagin's den of thieves.

Mr Brownlow, thinking that Oliver has run away with his money concludes that Oliver was a thief all along. This assumption is further strengthened when Bumble the beadle, answering an ad in the paper, placed by Brownlow, for information concerning Oliver, gives a disparaging opinion of Oliver.

Oliver is forced by Fagin to accompany Sikes in an attempted robbery, needing a small boy to enter a window and open the door for the housebreakers. The robbery is foiled when the house is alarmed and, in the ensuing confusion, Oliver is shot.

Oliver is nursed back to health at the home of the Maylies, the house Sikes was attempting to burglarize. Oliver imparts his story to the Maylies and Doctor Losberne.

The mysterious Monks, revealed to be Oliver's half brother, teams up with Fagin in an attempt to recapture Oliver and lead him into a life of crime thereby negating the unknowing Oliver's claim to his rightful inheritance which would then go to Monks.

Sike's woman, Nancy, having compassion for Oliver, overhears Fagin and Monk's plan and tells Rose Maylie in the hope of thwarting the plan. Rose recruits Mr. Brownlow, Dr. Losberne, and others.

Bumble the beadle has married the matron of the workhouse, Mrs. Corney. The former Mrs. Corney, attending the death of Old Sally, has taken the locket and ring that Sally had taken from Oliver's mother on her deathbed. Monks buys this locket and ring from the Bumbles hoping that in destroying it that Oliver's true identity will remain hidden.

Mr. Brownlow and Rose Maylie meet Nancy on London Bridge and she tells them where to find Monks. Fagin has had Nancy followed and, enraged, tells Sikes that Nancy has betrayed them. Sikes brutally murders Nancy and flees to the country.

Monks is taken by Mr. Brownlow. Fagin is captured and sentenced to be hung. Sikes, with a mob on his tail, accidentally hangs himself trying to escape. The Bumbles are relieved of their position at the workhouse, become paupers, and are now inmates at the same workhouse they once managed.

Oliver is revealed to be the illegitimate son of Edwin Leeford and Agnes Fleming. Leeford has fathered the evil Edward (Monks) through a failed former marriage. After seducing Agnes, Edwin dies, leaving a will which states that the unborn child will inherit his estate if "in his minority he should never have stained his name with any public act of dishonor, meanness, cowardice, or wrong" in the event of which all would go to Edward (Monks), hence Monk's attempt to corrupt Oliver via Fagin.

Monks is given half of Oliver's inheritance by Mr. Brownlow, who had been a friend of Edwin Leeford, in the hope that he will start a new life. Monks flees to America where he quickly squanders his portion and dies in prison. Rose Maylie is revealed to be the sister of Agnes Fleming who is adopted by the Maylies after her parents die, therefore Rose is Oliver's aunt.

Born near Manchester in 1941, David Warner is a distinguished stage, film and television actor. A graduate of the Royal Academy of Dramatic Arts by the time he was 19 years old, he first made his name known with his moving performance as the doomed King Henry VI in The Wars of the Roses, one of the Royal Shakespeare Company's most celebrated shows to this day. In 1965, he became the most talked about Hamlet of his generation. His innovative performance initially drew a lot of terrible reviews, but the show would soon become a hit, with teenagers and young adults packing the house in both London and Stratford for the next two years.

Back in 1964, he had gotten his first important movie role in Tom Jones, Tony Richardson's adaptation of the classic by Henry Fielding. He played Tom's cousin and worst enemy, the viperine Blifil. He followed that with the title role in Morgan! A Suitable Case for Treatment in 1966. Thanks to Morgan, Warner was able to demonstrate his full range as an actor. He could make you laugh, or scare you, one minute and move you to tears the next. His performance earned him a BAFTA nomination.

His amazing talent and offbeat looks have always brought a unique quality to his characters. Some of his most famous films : Straw Dogs, The Omen, Time After Time, Time Bandits, Tron, The Man with Two Brains, Star Trek VI, Titanic, Planet of the Apes and in 2005 League of Gentlemen’s Apocalypse. In 1981, he won an Emmy for his supporting performance in Masada.

David worked again with director Neil Gardner in 2007 to bring to life Robert Rankin's cult character Hugo Rune, in the 13 part full-cast audio dramatisation of "The Brightonomicon" which has since become a fan favourite audiobook and broadcast several times on BBC Radio 7.